This screen is initially displayed with a list of Decks of Cards or a message indicating that you need to add one. Create your own decks of cards that can be used to support your gaming system. You will begin by defining the deck itself. Then you will create "Named Decks" which represent the instances of those deck definitions that you will eventually use. By creating one or more "Named Decks" you can use the same deck definition in several games concurrently as each Named Deck will maintain its sorted order and drawn cards separately.

Each of the Named Decks will appear here in the list for you to select. Choose one from the drop down list. Select "Draw" button to draw the next card from the deck. If the last card has been drawn from the deck, it will automatically shuffle the deck and draw the next card. Note: This feature does not have the ability to maintain "hands".

The results are displayed on this screen with the latest draw at the top. If you long-press on an individual result, you will have the option to copy it to the clipboard where it can be pasted anywhere to share.

Several features are accessible by using the menu on your device. 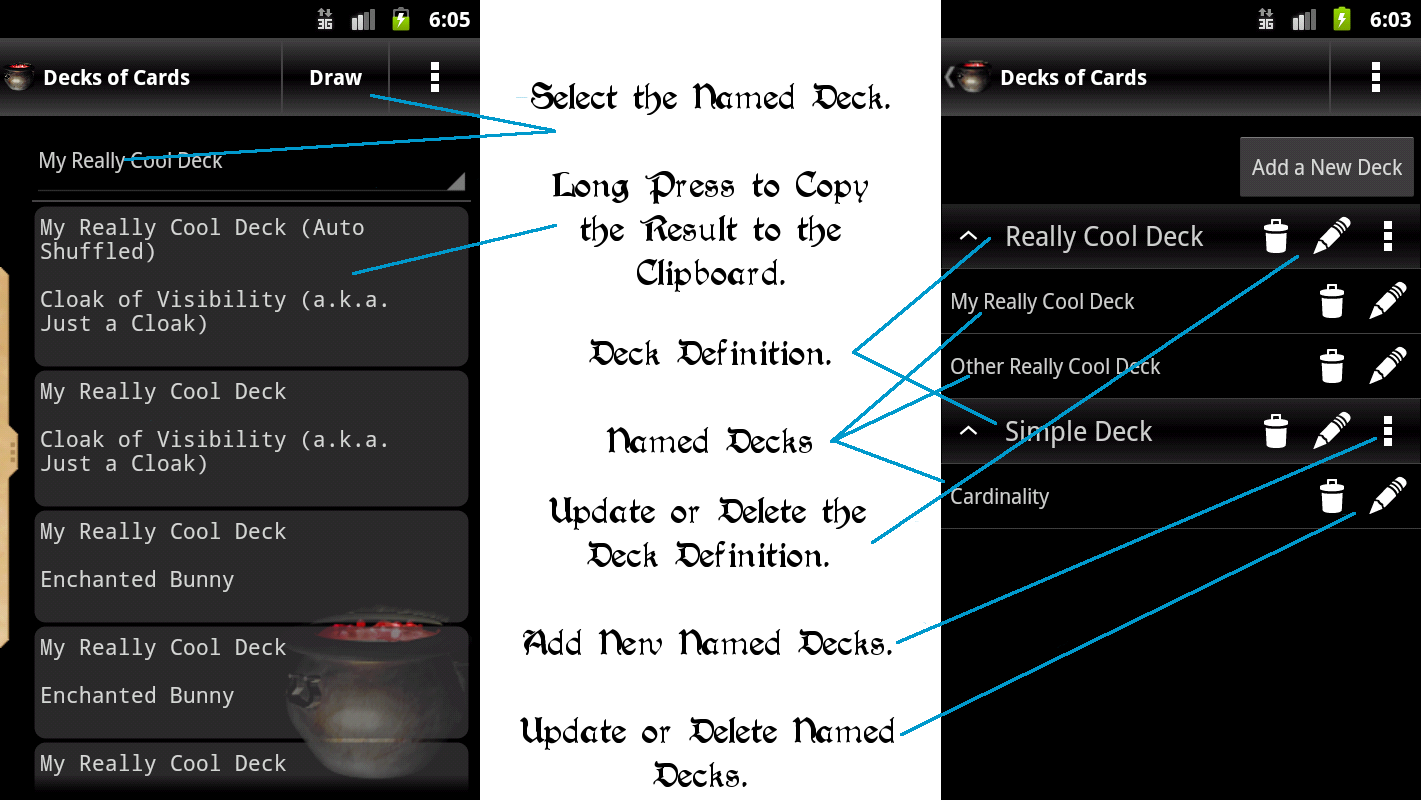 This will show you all the Decks of Cards you have currently defined. It will also show you all the Named Decks that have been created. From here, you will manage these definition. On this screen you will find the following elements:

The primary menu for this activity offers you the following options: 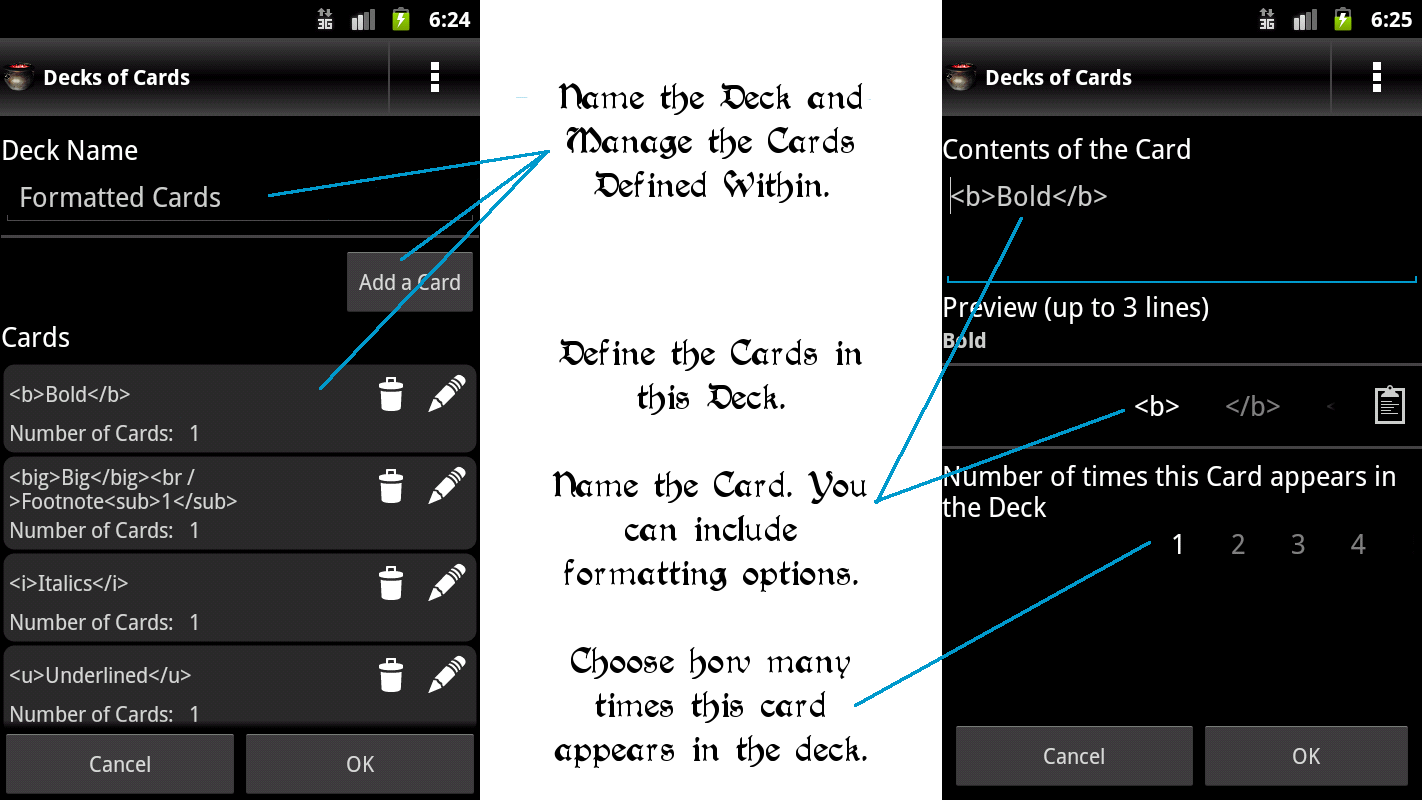 Defining a Deck of Cards involves naming the deck and adding a list of cards that make up the deck. Each Card consists of a Display Name or Description Text that instructs you what to do when the Card is drawn. You will also define how many of these Cards appear in the Deck. Note: You can update the deck definitions at any time, however doing so will delete all Named Decks associated with this definition.

You can apply HTML-ish formatting options to the Card. These options include

This will make your XML import files a little more complicated if you choose to use the formatting options, but they could really make your results stand out. It's important to make sure you match the beginning and ending pair of tags when specifying the format. Notice how there is a beginning and ending tag for each element (except Line Break) above. These must be specified in pairs. You can use as many as you like, but they cannot overlap one-another.

The Line Break is a special case. In this case you will begin and end the tag at the same time. Now, the formatting options are not that forgiving. If you make a mistake with the tags, it will not format the die face, but rather display the text in its raw form. Of course, if you are having problems, just drop us a note and we will be happy to help. 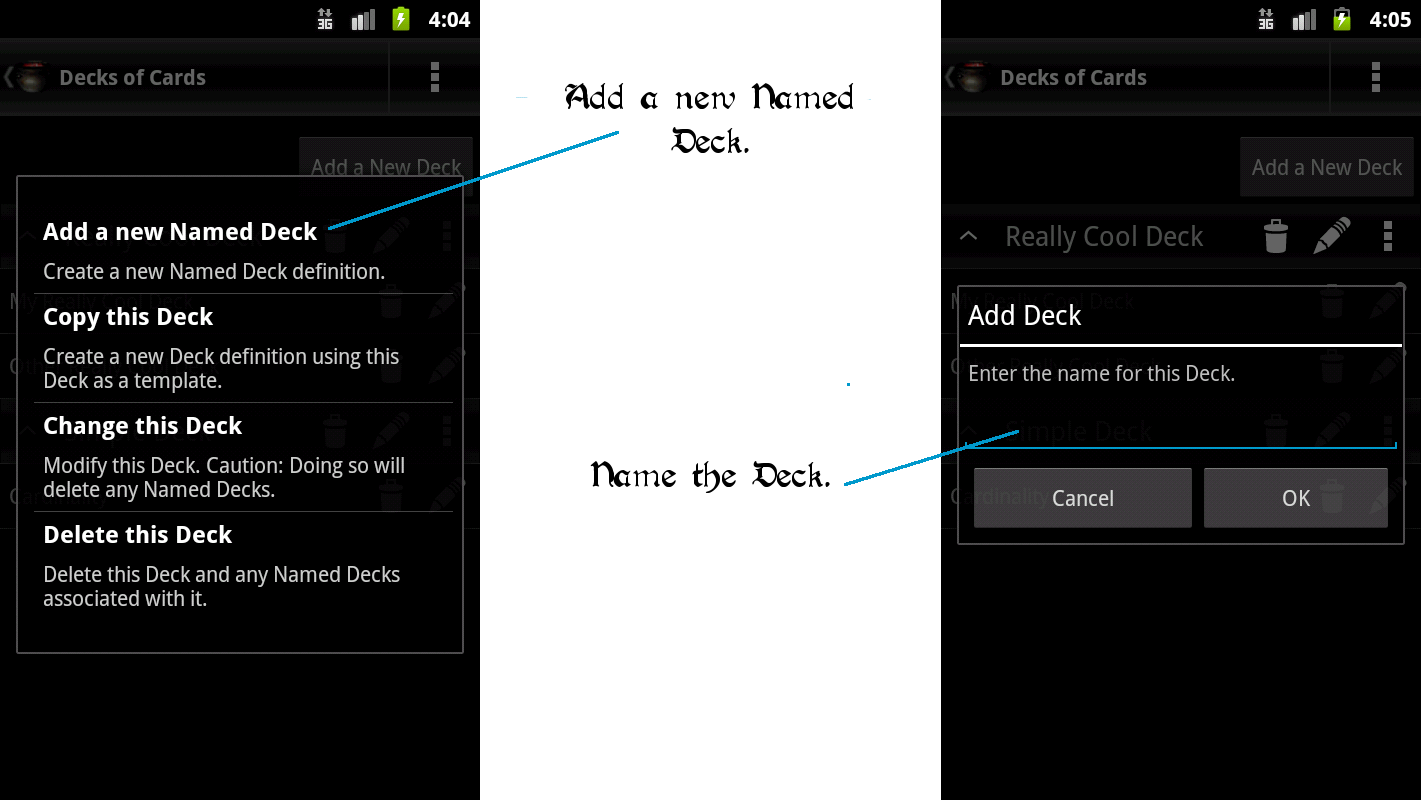